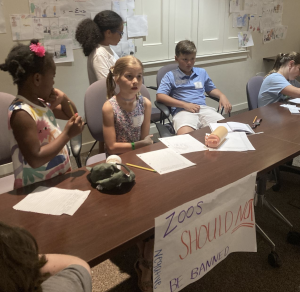 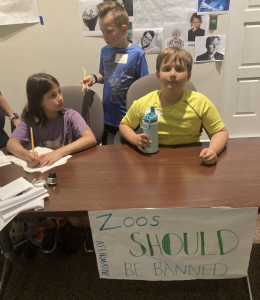 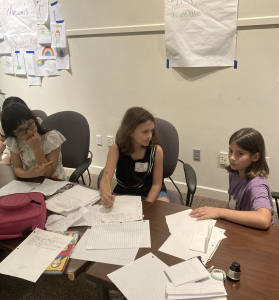 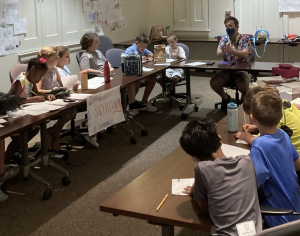 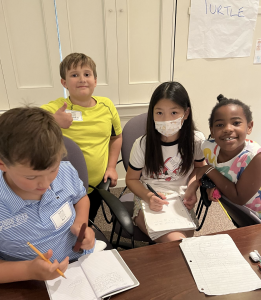 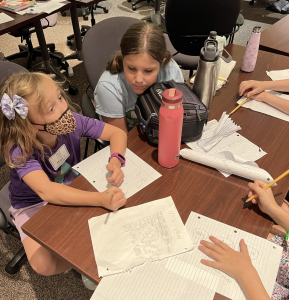 Students of the Great Debate:

I can’t believe we’re so near the end! Today was our penultimate session. We have tomorrow, and then… well, then our time will be in the rearview, as we head off to new adventures.  Tomorrow we’ll have (at least) two debates. We’ll debate before lunch and we’ll have a second topic in the afternoon. We’ll also see your sketches; do be certain to tell your families about how you were sorted into groups and asked to construct short skits exemplifying the twelve fallacies we’ve thus far covered in class). We’ll learn a few more fallacies – if you can believe it! – and we’ll put Maslow’s Hierarchy to good use.  And, of course, at the end of the day you can take with you your artwork, your sketches, and any notes you’ve collected during your debates.

But let’s not get ahead of ourselves: What a day we had today! We began with more exercises courtesy of Augusto Boal, as well as Viola Spolin (we’ll be adding her name and photo to the List of Folks You Should Know). We had two debates on the topic of homework. We unpacked the theories of Abraham Maslow. We had a lot of fun – well, I hope you did, because I had a blast.

Have a great evening. I look forward to seeing you in the morning!

Students of the Great Debate:
It cannot be overstated how impressed I am with the amount of content you assimilated today! I hope you’ll share with your parents the differences between deductive and inductive reasoning — including the role that sign reasoning can play when entailing a conclusion! Be sure to tell your parents about the differences between the lexicographic rule and the aggregate rule — and, yeah, if you’d like to give as an example your singular reason for not wanting to get lunch at Bill’s Burger Joint! And should you find yourself aware of someone offering up a fallacy as logic — whether that by a non sequitur, an appeal to ignorance, or even a dreaded ad hominem attack — I know you’ll redress that error with the most excellent ethos!
Out class today featured two debates, with a total of four teams vying to change minds and win hearts. Of course, I also know that you know that the most important game is not the finite game, but rather the infinite game: the purpose of our relationships and our communication should not be to “win” but rather to continue playing the game!
Speaking of games, when you tell your family about how our class can quickly form a rhombus, count to fifteen, or jump in the air, you’ll want to remember the most important component of this work: listening. That’s the key, friends. That’s always the key.
I look forward to seeing you tomorrow, and to continue our listening together.
Best,
David

Students of the Great Debate:

Thank you for our first two days! I can’t believe we’re already 40% of the way through our time together – and yet, I’m so impressed with how much content we’ve covered in so short a time.

You know that an argument is a position supported with evidence, and that a debate need not be contentious. You’re grappled with Aristotle’s theories of rhetoric and dramatic structure; you most certainly know your Beginning, Middle, and End from your ethos, pathos, and logos. We’ve discussed the importance of creating logical appeals as well as emotional appeals; on our first day, we turned to Maya Angelou, who famously said, “I’ve learned that people will forget what you said, people will forget what you did, but people will never forget how you made them feel.”

We’ve experimented with storytelling and community-building tools credited to Andre Breton, Augusto Boal, and Frida Kahlo (do be sure to tell your family about our game of Exquisite Corpse). And if you’re keeping track, the soundtrack of our prep sessions has included Miles Davis, Vince Guaraldi, and Dave Brubeck. Very chill, friends.

And…you’ve had your first debates! We’re working within a modified Team Policy Debate structure, and it is my intention that by tomorrow you’ll each have had an opportunity to argue in both the Affirmative and the Negative. We’ve debated the merits of SAVY-funded pizza, the finer points of cheetahs, and the superior nature of the color pink. Tomorrow morning, we’ll have two rounds of debate, covering the prompt, “Vanderbilt University should invest school resources in building more accessibility ramps.” I can’t wait to hear your thoughts on this important topic!

As ever, I thank you for your focus and diligence. I meant what I said today: learning is dependent upon collaboration and cooperation. You know that communication is a transactional process, and it’s a pleasure to be in the feedback flow with you!

See you in the morning,