Friday: We were in full programming mode on our last day! These programmers know how to use their new vocabulary, so not only can they walk the walk, but they can also talk the talk. Developing multiple events within the same program was the skill we added to our coding knowledge today.  This was an exciting step because they get to start adding more advanced features to characters within games. The programmers were able to create a Flappy Bird game where they programmed the background to change, the character to score points, and the game to end when the character failed. Learning about events is the first step to developing code for the unexpected in a program or the outside world. We had to step up our higher order thinking skills and try to predict possible outcomes for the characters. They can log into code.org on a computer at home and continue this lesson if they did not finish.

After lunch, these programmers researched careers in technology. We learned about a man named Kinsley who is a Software Engineer at Facebook. We were also introduced to Fredrico who is a Technical Manager at Microsoft. Although these two develop different programs, they both explained how a large part of their job is working with careers outside of computer science to build better programs. Teamwork and communication were a large part of their jobs that we are practicing this week.

The day continued with an official group meeting to present their Lego Robotics. Each group had to answer the following questions:

Programmers independently adjusted their programs after failures and made design improvements after each try. The teamwork was the most impressive, especially when things were frustrating. I was amazed by the intuition, work ethic, motivation, and depth of thought that these programmers exhibited throughout the week. I hope they continue to enjoy programming and it inspires them to take the initiative to learn more on their own.

What did you program your Lego Boost to do that made it move successfully, such as a start block?

What did not work well for your robot during programming that you had to change?

What was your favorite thing about the week at programming and robotics? 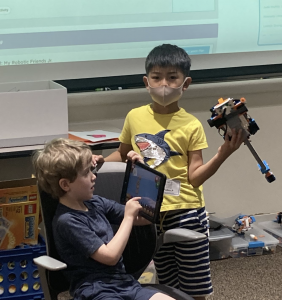 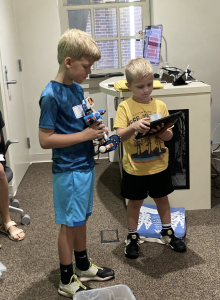 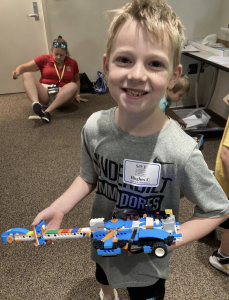 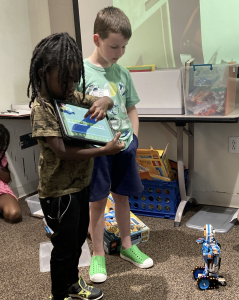 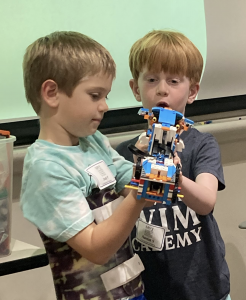 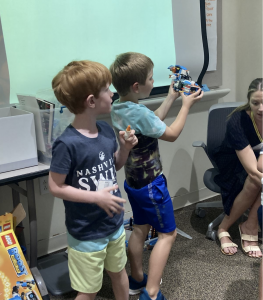 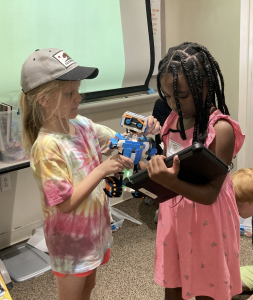 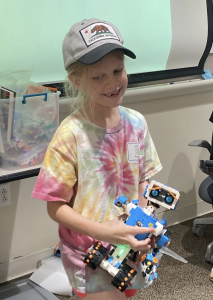 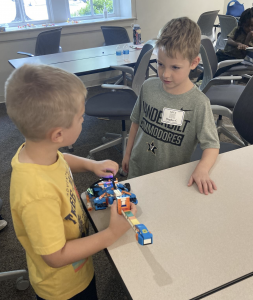 Thursday: What a day of programming! We have filled our brains with new vocabulary this week and it is imperative to use it while we code, so we started the day with a vocabulary review game. The programmers had to find even more advanced patterns within a code to turn into a loop and even see patterns within a loop. I was proud at how they were mastering the use of those blocks. We had to step up our higher order thinking skills and try to predict possible outcomes for the characters.

Continuing our investigation of AI and robots completing human tasks, we were introduced to a new robot.  We watched a video of a robot in Japan that picks up an ice cream cone, pours a perfect cone of ice cream, and places it on a tray for pickup. To study this robot system, we completed a systems chart and found the inputs, boundaries, elements, interactions, and outputs. The best part of the discussion was when we answered the question, “How could you improve this robot?” These programmers brought lots of excitement and critical thinking to what mishaps could occur and how “AI” could possibly solve them.

The most exciting part of the day was when they engineered new features for their Lego Boost robots. Some groups built a human-like robot that moved with a belt system and others created a robot that had a belt with sensors similar to what you would see in warehouses. I am thrilled with their ability to make connections to other industries! They were all excited about the guitar concert that played sounds according to color and the cat that could move its eyes.

What sensors do you think were included in the ice cream robot?

How does your team communicate while building the Lego robot?

Wednesday: Today we hit the ground running! It started with a review game of the skills we have learned so far this week. We were introduced to new vocabulary and new blocks to use while coding. We can now identify repeating patterns with multiple steps and apply loops within our programs. But we didn’t stop here! These programmers shortened the algorithm for building cup pyramids using loops. A loop is the action of doing something over and over again, so we came to the conclusion that using these blocks make giving instructions easier.

Problem solving skills were very important today as we completed coding puzzles on code.org. Programmers had to identify what character would do according to a code that was provided and then shorten that code with loops to make it smaller. It took a lot of critical thinking and trial and error to complete but I was proud of their perseverance.

While learning more about coding, we leveled up with a lesson on angles within shapes. The programmers had to learn different degrees in which a character would turn. They had the hard task of using their character to draw specific shapes while identifying an angle’s degree and the number of pixels they have to travel on each side of the shape. These new skills were transferred to our code.org platform where the programmers worked through online puzzles to “debug” and add loops to finished code.

Why do you need to know angle measurements to code characters to turn?

What is a loop and how does it help you while programming?

Have you added a sensor to your Lego robot?

Tuesday: Today these programmers learned that their job isn’t always creating new technology. They became aware that a big part of their job description is fixing or “debugging” programming problems. We started the day reading more of Peter Brown’s, The Wild Robot Escapes, to put our brains in the futuristic mindset of the world of robots. We continued developing our collaboration skills with a lesson on perseverance and frustration. The students worked together to engineer a structure built out of toothpicks and gumdrops that could hold up a book for at least 10 seconds.

Then, we focused on the new vocabulary words bug, debugging, and sequencing. The students had to complete an activity called “My Robotic Friends”. In this activity, one student was the robot, and the other student was the programmer. The programmer would write a program with arrows that the robot had to interpret to build cups. They loved this activity and most groups were quickly able to identify problems and debug.

Continuing with our theme of robots in the workplace, we studied new technology.  We learned the specific sensors robots equipped with “AI” use to think and learn new things. We watched a video of an “AI” robot in a home use the different sensors to learn new tricks. The programmers talked about robots they know use “AI” such as Amazon’s Alexa or Google Home.

Our day concluded with the best part: building our robots. Teams used all of their concepts of inputs, interactions, elements, outputs, boundaries, coding, engineering, collaboration, perseverance and all other things mathematics I forgot to mention, to begin construction of a  robot. Each group chose out of a selection of different robots to build. Some of the choices are a cat, a human like robot, a guitar, or a construction vehicle. I am so proud at how much our team building skills have improved in just 2 short days together. They progressed much faster through the building process than the day before. These robots take time to put together, but they are still very focused and excited!

What is artificial intelligence?

How do robots use sensors?

Why is it important to know how to “debug” programs?

Why is it important for programmers to persevere?

Monday: These programmers had a great first day conceptualizing the world of robotics! We started by reading the first chapter of Peter Brown’s best seller, The Wild Robot Escapes. This allowed us to discuss how robots know what tasks to perform. Then we learned about perseverance and frustration through evaluating clips and images. We focused on how programmers persevere and learn how to handle their frustration as an important part of their job. We learned the new vocabulary words persistence and algorithm. We will be adding many more new words to that list as the week continues. The students transferred these skills to using blockly coding on code.org. They were able to learn a language to communicate with their robot (computer character) to complete tasks. This also highlighted the importance of critical thinking and debugging or fixing errors.

The overarching theme of the week focuses on the effects of robots in the workplace. Today we learned that AI or artificial intelligence makes it possible for machines to learn from experience, adjust to new inputs, and perform human like tasks. First, we talked about the AI they have seen before. Then, we watched a video and discussed how the company Amazon used robots in their warehouses. This allowed us to debate about the causes and effects of robots in the workplace and problem solve real world issues.

The most popular part of the day was combining our engineering skills and programming skills to build Lego Boost robots and have the robots complete small missions. As the week goes on, these missions will be harder. The most important aspect of the day is that these programmers learn to work together as team members. We are continuously talking about how to problem solve with others to create success!

What types of jobs were the robots in the Amazon warehouse performing?

Why do you think Amazon has robots filling orders?

This is an amazing group of analytical thinkers and I cannot wait to see what we can develop together this week!