Already two days have flown by!

The class is really picking up steam now as we further analyzed simultaneous, complete information, discrete, finite, non-cooperative, 1 on 1 games. This morning we looked at the prisoner’s dilemma with 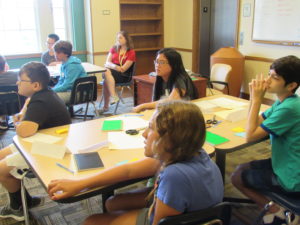 a twist. What if people have different levels of guilt from stealing or sharing? Can we gain an edge in the game if we know what type of person we are playing against? Information availability in these games is crucial as we found out this morning.

We then moved on to learning how to analyze games that were sequential instead of instantaneous. Today they worked in teams to come up with an optimal strategy for 2 by 2 dots and boxes. Hopefully a more complete version of this will be reached tomorrow as we learn about decision trees for analysis in sequential games.

Here is the brain teaser for the day. See if you can use a sequential analysis of this game to solve the problem: 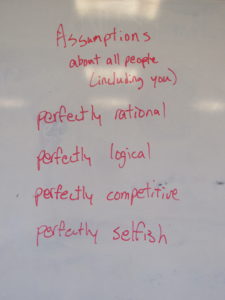 Three Savicians were taken captive. According to custom they had to pass an intelligence test, or be exiled. The headmaster showed 5 headbands – 2 red and 3 white. The 3 of them were blindfolded and positioned one after another, face to back. The headmaster put a headband on each of their heads, hid two remaining headbands, and removed their blindfolds. The third man could see the headbands on the two men in front of him, the second man could see the headband on the first, and the first could not see any headbands at all.

According to the rules any one of the three men could speak first and try to guess his headband color. And if he guessed correctly – they all passed the test and could go free, if not – they failed. They were not allowed to communicate other than that. Could the logicians pass the test with 100% certainty? If so, who was the one to speak up and win the day?

Our first case study looked at the effects of anchoring on consumers willingness to pay. Ask your student to describe this study as well as the similar experiment that they undertook in class. I told them to reassure you that they are not becoming cynical…just becoming behavioral economists.