The class got off to a great start today as we introduced the basic principles in game theory. We defined games as far as the context of our class is concerned and consider game theory as the study of strategy. We practiced studying games by looking at the classical example of the prisoner’s dilemma. Students will be playing games with incentives in the currency of Sash (savy cash). So if your students mention their sash stash this is what they are talking about. And yes, the person with the most Sash at the end of the week will receive a sash.

Students made great connections in the prisoner’s dilemma game about what would happen if we also considered social ramifications. It’s like they read my mind about tomorrow’s lead in to behavioral economics.

We also practiced our game-theoretical analysis on the following brain teaser. See if you can solve it…or have your student give you hints along the way.

Three Savicians were taken captive by a hostile tribe. According to tribe’s custom they had to pass an intelligence test, or die. The headmaster showed 5 headbands – 2 red and 3 white. The 3 men were blindfolded and positioned one after another, face to back. The headmaster put a headband on each of their heads, hid two remaining headbands, and removed their blindfolds. So the third man could see the headbands on the two men in front of him, the second man could see the headband on the first, and the first could not see any headbands at all.
According to the rules any one of the three men could speak first and try to guess his headband color. And if he guessed correctly – they all passed the test and could go free, if not – they failed. It so happened that all 3 savicians were prominent logicians from a nearby academy. The headmaster gave all three men white headbands. Could the logicians pass the test with 100% certainty? If so, who was the one to speak up and win the day? 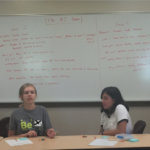 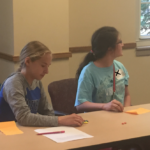