Posted by morganr1 on Wednesday, July 11, 2018 in SAVY, Uncategorized.

Three down, two to go in Think Like a Lawyer. We did our second round of logic games today, and overall, the class is improving. Today’s problem was about scheduling movies and our class got faster and did a better job today than yesterday applying the rules. I bet that tomorrow, they’ll be even better.

Today’s topic of focus was Property. We started our discussion with the four sticks in the bundle of property rights: the right to use, exclude, alienate and destroy. But what does it mean to own property in the first place? To answer this deceptively easy question, our class read the law school classic, Pierson v. Post. In that case from the early days of our country, one hunter was in pursuit of a fox he had hunted over a few days. Cue hunter number two, who swooped in at the last minute, shot the fox and took it for himself. Hunter one sued hunter two for the value of the fox, saying that it was his property and the second hunter took it from him. Hunter two responded that the first hunter never owned the fox and that it was open for his taking. The court ended up agreeing with the second hunter. See if your child can tell you why the second hunter won over the first.

After finishing Pierson, our class learned about nuisance. Nuisance claims arise when two people’s bundles of property rights overlap and conflict. Our class examined a hypothetical fact set based on a real case ( Thomsen v. Greve). In our situation, one neighbor used a wood burning stove to heat their house, but their next door neighbor with asthma complained that the smoke was seeping into their own house and causing her breathing problems. Our class applied the four elements of nuisance to this problem. Remember, the most important element is the third, which asks, “does the gravity of the activity’s harm outweigh its benefits.” Perspectives on this question were strong, so your student likely has an opinion on whether the asthmatic or neighbor with the wood stove should have won.

Our last subject under Property was the Fifth Amendment’s Takings Clause on eminent domain. We learned that the government can take a private citizen’s property so long as does so for a public purpose, and the citizen is given just compensation. We first learned that the amount of compensation that is just is based off of the fair market value of the property, which is determined by comparable sales. The more interesting question underlying eminent domain is what exactly counts as a public use, though. To answer this, we first watched, Southwest Remembered, which details the history of blighting property in the Southwestern quadrant of Washington, D.C. to be redeveloped. After that, we continued on the quest to define public use with the Supreme Court case, Midkiff. There, the Hawaiian legislature sought to break up land ownership because only a small percentage of the population controlled most of the land. Finally, we learned about Kelo by reading an article from Richard Epstein and listening to the oral argument from the Supreme Court.

Tomorrow, we turn to Torts. After learning the rules for a lot of different tort claims (assault, battery, false imprisonment, the duty to rescuers, and so on), we’ll test our ability to apply legal rules by spotting and debating the torts in the film, The Incredibles. As always, have a great night, and see you tomorrow.

Photo From Our Day 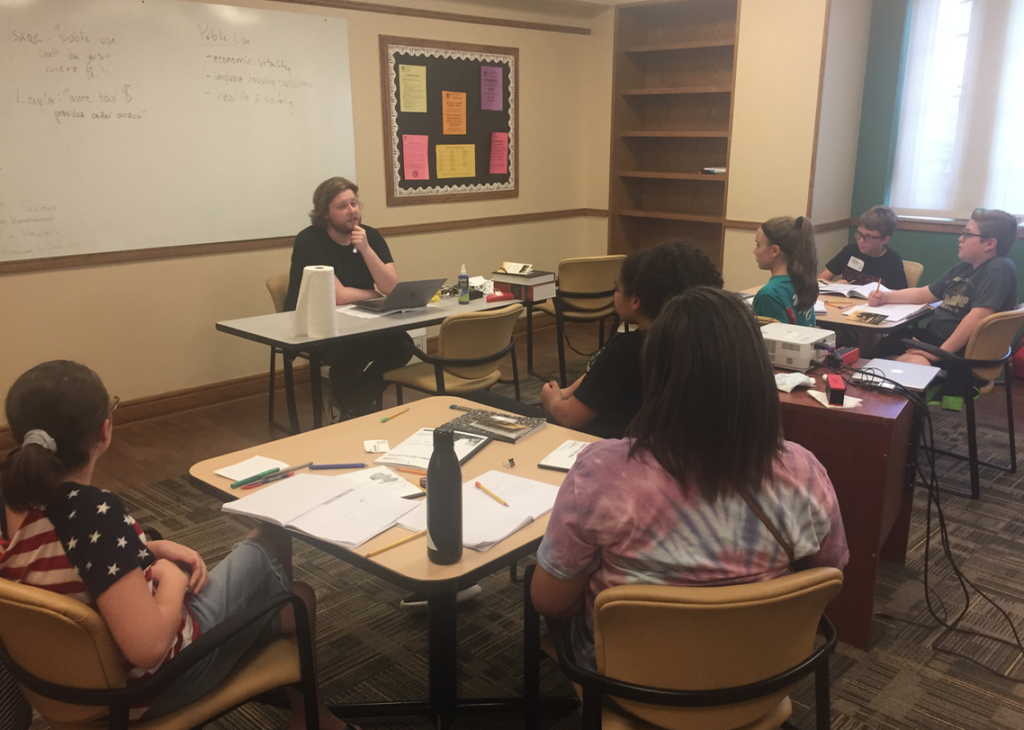