We learned a lot on our first day in Think Like a Lawyer, and we set strong Constitutional foundations for the rest of this week at SAVY. We began with the beginning—Article I of the Constitution—which details the role of the legislature. A lot of our early reading was review. We reminded ourselves that we have a bicameral legislature consisting of the House and Senate. We remembered how each body is elected, how representation in the House is based on population, and how each State gets two Senators.

From there, we turned to consider the scope of Congress’s power under the Constitution. First, we explored § 8 of Article I, which lists Congress’s enumerated powers. An enumerated power we spent some time studying was the Commerce Clause. We discussed the Wickard v. Filburn case, and the “aggregate principle” it gave us to decide whether an activity amounts to interstate commerce under Article I. Remember, the question to ask is, “If everybody were to do this, would it have an impact on interstate commerce?” We wrapped up our discussion of the Commerce Clause through considering Chief Justice Roberts’ logic in the Obamacare case. Ask your students about parades of broccoli!

We also learned about the Necessary and Proper Clause under § 8 of Article I through reading about McCulloch v. Maryland. In that case, Chief Justice John Marshall concluded that the necessary and proper clause did not mean “absolutely necessary,” and so long as a law promotes one of the enumerated powers listed out in Article I, Congress may pass it!

Leaving Congress for the President, we then studied Article II of the Constitution, specifically, the Commander in Chief Clause. For this task, students read their very first case, Youngstown Sheet & Tube Co. v. Sawyer! And from the Supreme Court, no less! We learned about President Truman’s seizure of the steel mills during the Korean War, and how Justice Jackson’s concurrence in the Youngstown case gave us three zones of the President’s war powers. In that case, Justice Jackson concluded that President Truman’s seizure of the steel mills was in contradiction to Congress’s laws (zone 3), and so it was an invalid exercise of Presidential power.

Finally, we turned to Article III, which discusses the judicial branch of our government. We had so many great discussions, time was short for this subject. Nevertheless, our class pressed on and learned about Standing. This was our very first true legal rule we learned, and students should look forward to many more legal rules in other subjects this week. Tomorrow morning we will wrap up with the judicial branch before turning to consider the Fourth Amendment’s protections from unreasonable searches and seizures.

One last thing! Don’t forget to watch or read who President Trump nominates to the Supreme Court this evening. Supreme Court nominations are one of the most exciting events for law nerds like me, and we’ll be sure to chat a bit about the nominee tomorrow in class. Until then, have a great night, and see you in the morning! 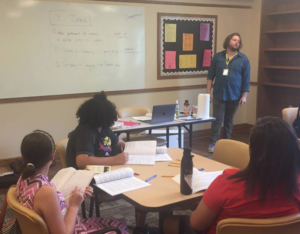 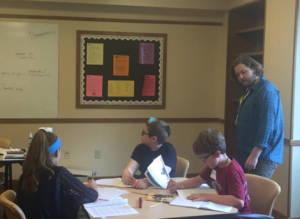