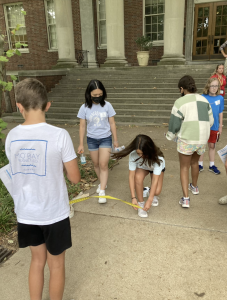 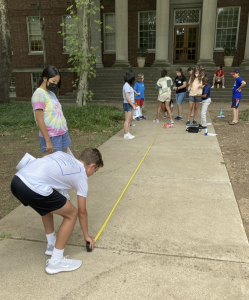 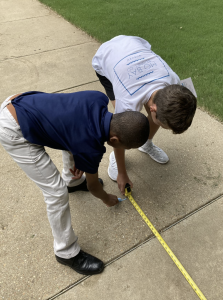 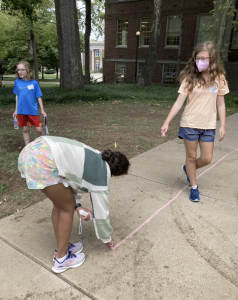 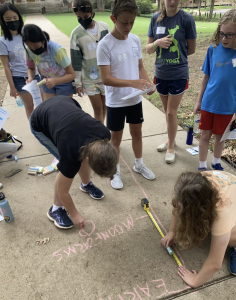 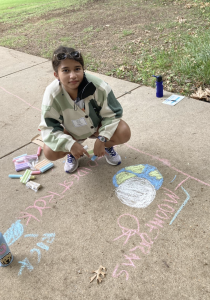 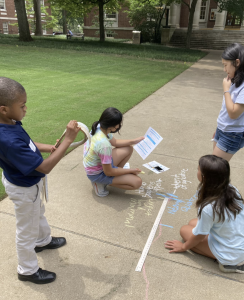 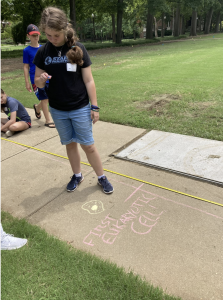 Wednesday: Happy Hump Day, and welcome to Day 3 of Conservation Paleobiology at SAVY!

We started today by applying the method we learned about at the end of the day yesterday (Leaf Margin Analysis) to pictures of fossil leaves in order to work out the average temperature at two time intervals during the Paleocene-Eocene Thermal Maximum, or PETM. The PETM is often used as a comparison for modern climate change because it was a period of time where the global temperature raised approximately 5-8°C over an interval of ~200,000 years – geologically, the blink of an eye. Using Leaf Margin Analysis, students discovered that the average temperature in the Big Horn Basin of Wyoming went from 61.1°F to 70.8°F in just 100,000 years! The PETM was a super important interval for the extinction of many marine animals (especially foraminifera, the microscopic photosynthesizing organisms that form the base of ocean food chains) and the appearance of land mammals (such as primates).

After finishing up our leaf margin analysis, we moved on to morphology – the study of fossil shapes. Turns out that animals adapt to their environment in fairly predictable ways: thicker shells for stronger ocean currents, sharp teeth for a meat-eating diet, and complex molars for increasingly harder plant foods in diet. I took us through a lecture where I shared pictures and data from my own research highlighting how teeth vary, erupt, wear down and, ultimately, change throughout an organisms’ life. This focus on tooth morphology spurred a lot of discussion and excitement and set us up to focus in on one particular fossil location that served for the basis of much of my Ph.D. – the late-Pleistocene site of Diamond Valley Lake from southern California.

In the afternoon, students examined the age structure of a population of bison recovered from the site using clues from teeth. As bison teeth wear, a very diagnostic feature known as a stylid appears, separates out from the rest of the chewing surface, and eventually is resorbed into the molar. Additionally, the height of the bison crown shrinks over time. Thus, you can use the height of the molar crown, the relative shape of the cusps, and the presence or appearance of the stylid to classify bison into age groups – young, middle aged, and old. This amazing tool actually lets us examine population structure for a group of long-dead animals! Again, this sets us up for a great comparison to modern bison populations.

Finally, students assisted me in data collection. We went through 82 (82!!!) pictures of camel (Camelops), bison (Bison), and horse (Equus) teeth from the Diamond Valley Lake fauna, and students used mesowear methods to classify those teeth as having worn down from primarily attrition (tooth-on-tooth wear) or abrasion (tooth-on-food wear). Basically, animals that eat grass have teeth worn down from abrasion and tend to be fairly flat, while animals that eat leaves and browse have teeth worn down from attrition and tend to be sharper. The students used the same methods I did to classify these teeth. I’ll enter their data into an Excel spreadsheet for analysis tomorrow and we will see how their results compare to those of a group of experts!

I left students by watching a video by Dr. Jack Horner, the paleontological adviser for Jurassic Park. Dr. Horner has spent his career trying to get a pet dinosaur! He’s doing this by examining dinosaur DNA via a chicken to create a “chicken-saurus”. What Dr. Horner is really doing is hitting on a broader concept in Paleobiology known as “De-Extinction” – i.e., bringing extinct animals back from the evolutionary grave. This is a controversial topic (As you could imagine) and overlaps tangentially with “Re-wilding” – the idea of reintroducing relatives of extinct animals to areas where their close relatives once lived. Think lions in the hills of Colorado or elephants in the Canadian taiga. Again, a controversial topic. We will use these topics to bounce into tomorrow’s research, where we will spend time in the computer lab downstairs.

Links to videos meant to engage students in these concepts are below:

Thanks again for entrusting me with your children! I look forward to a great second half of our week together.

Day 2 of SAVY kicked off with a bang, as students entered the room in exasperation of the terms they did not understand from last night’s reading. We went through the article and used context clues (including hints from elsewhere in the sentence and Latin roots and prefixes) to define complex terms including bolide (a large asteroid), phylochronology (examination of relationships among organisms over time), contemporaneous (existing or occurring at the same place and time), clade (a group of organisms that share a last common ancestor), and morphospecies (species or organisms that scientists classify together based on similar shape or features). I’d say this was good practice for future standardized tests!

Next, we addressed a simple question: What, exactly, is a species? We discussed a few of the historical ways that scientists described species and concluded that there are problems with all of these definitions. For example, species DO change over space and time (adaptation…), they CAN interbreed (mules, anyone?), and they sometimes perform different roles in different ecosystems. Did you know that there are an estimated 1.5 million named animal species, and about 10,000 new ones are named every year??? By some estimates, there are likely over 10 million animal species on the planet.

Following this, we talked about how scientists classify organisms (Linnean Classification, a.k.a. King Phillip Came Over For Great Spaghetti!) and how we organize all of this diversity. Students learned how to construct a phylogenetic tree (another of our unknown terms – simply a hypothesis of evolutionary relationships among organisms) using something we are all familiar with – sandwiches! Basically, students came up with the characters that were important for separating “species’ of sandwiches and placed them on a cladogram to show how they might be related. 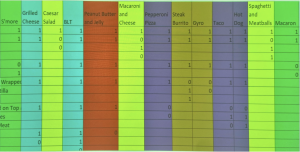 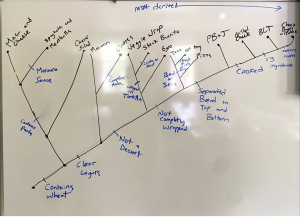 Who knew that a Macaron was more closely related to a Steak Burrito than a Grilled Cheese?

After lunch, students practiced making phylogenetic trees for coins as well as real animal taxa (dogs, cats, bears, seals, weasels, and mongooses, among other things). They learned how scientists can have different opinions that must be reconciled (maximum likelihood estimation) and how the most likely scenario is the one that involves the fewest number of evolutionary changes (parsimony). The goal here was to show how morphological data can be used to define the relationships among species, and to learn that our definitions among species continually evolve with new information (including genetic data!)

Finally, we began to look at tools that paleoecologists use to reconstruct past environments. To begin with, plants! Students learned about how fossil pollen and phytoliths (microscopic spherules of quartz embedded in grass blades) can be used to reconstruct ecosystems, determine what crops were grown by ancient peoples, and even how extinction events occurred (For example, sediments recovered from the geologic layer that includes the remnants of the asteroid that killed the dinosaur shows pollen that is actually CHARRED! How cool is that?!)

Students ended the day by conducting a Leaf Margin Analysis. This is a paleoecological tool that takes advantage of the fact that leaves with smooth margins (e.g., oaks and magnolias) tend to occur in warmer latitudes, while leaves with toothed margines (e.g., birch and aspen) tend to occur in cooler latitudes. The relationship can be summarized by the following equation:  MAT = (0.3006 x %smooth) +1.141

To see how reliable this method is at a place like Vanderbilt, students collected a sample of ~150 leaves and calculated the percentage of smooth vs. toothed leaves. We ended up calculating a mean annual temperature of 72.3°F  –  quite higher than Nashville’s actual mean annual temperature of 60°F. So what gives? Turns out that our sample was overwhelmingly comprised of oak leaves. Oaks, which tend to be found more abundantly in warmer climates like Georgia and Florida, were planted here about 150 years ago prior to and just at the founding of Vanderbilt University by Bishop McTyeire. It would be interesting to compare this sample with a sample from the trees behind your house. I encourage you to get your child to do this and see if a larger, more natural sample might yield an estimate closer to 60°F!

Monday: Welcome to Conservation Paleobiology! What an exciting community of students we have gathered together this year. I am so exited to get to know everyone in the class and come together to learn about the amazing tools that paleontologists use to decode the fossil record.

Today, we started out by getting to know one another through introductions. Students told us their name, where they were from, and an interesting fact about themselves. Its amazing to hear about the neat places our students have lived (one student spent an entire month living on an island) and the interesting people that they have met (K.A. Applegate, one of my favorite authors growing up!). We have a lot of students who are interested in science, reading, and the nature of life. What a great group!

Before we dove into the material, I wanted to know what students already know about Conservation and about Paleobiology. As an instructor, this helps me understand what students already know, what they don’t know yet, and what misconceptions they might have about the field. To that end, I instructed students to complete a concept map detailing everything they know about the field. Learn more about concept maps, the science behind their efficacy, and how they can be used in the classroom at Vanderbilt’s Center for Teaching here (about halfway down the page): Active Learning | Center for Teaching | Vanderbilt University.

Next, I provided an overview of Conservation Paleobiology and introduced the unique question that this course seeks to address: How does the paleontological record provide a unique perspective into modern conservation theory? We will spend the next four days familiarizing ourselves with the nature of the fossil record and the tools that paleontologists use to answer this question. First, however, we need to understand how the field draws from the disciplines of geology, biology, anatomy, ecology, chemistry, and data science to answer broad questions. I had students define each field, including potential strengths and weaknesses when it came to understanding the fossil record. We then shared these definitions to the rest of the class.

After lunch, students interrogated the question of just how “old” is old? Its easy for us to talk about “ancient life” and “fossils” but its quite another thing to see these events born out on a geologic time line. Thus, we had an active learning activity where students translated the timing of past events (e.g., extinction of the dinosaurs; emergence of eukaryotic cells; the building of the Appalachian Mountains) into distances along a 100 ft timeline. We then drew the timeline using chalk and students flexed their artistic abilities with drawings of each event.

Finally, it is important for students to be able to read scientific articles to understand how scientists communicate to one another and to the public. Thus, we engaged in structured reading of the article by Anthony Barnosky and colleagues, “Has the Earth’s sixth mass extinction already arrived?” This article is a review article that explains methods to compare current rates of biodiversity loss with mass extinctions in the past. There was quite a lot of unknown terminology in this paper, so I told students to take the papers home, read through them and come up with 5-10 words that they did not understand. We will try our hand at defining these tomorrow!

Thank you for entrusting your children with us here at the Summer Academy at Vanderbilt for the Young. I look forward to a great week together!