Friday: Good evening SAVY students and parents! What a wonderful week of deepening our understanding of fractions and operations with fractions.  In the final lesson, students expanded upon their work with addition and subtraction to develop concepts of multiplication and division of fractions.  We further developed algorithms and compared them to the student’s own algorithms as we worked with recipes from Grandma’s cookbook.  As with whole numbers, multiplication of fractions was introduced as repeated addition. Multiplying fractions in recipes by whole numbers were used as students determined the amounts needed to scale up recipes.  This was then extended to multiplying a fraction times a whole number and then a fraction times a fraction as students determined recipe amounts for smaller portions.  As we worked in groups to scale up and scale down recipes, students were encouraged to share their strategies and explain their reasoning with words, diagrams, and equations.   As we continuously practiced communicating mathematically, students were motivated to organize, consolidate, and clarify their own thinking.  This lesson also provided the opportunity for us to focus on learning how to operate with fractions in everyday situations, which enhances the idea of students developing their own meanings for fraction concepts and operations with fractions.

Thank you so much for allowing your students to take part in Fractions at Work session. Please be sure to allow them talk through the posters that they are bringing home this afternoon. The students took great pride in creating final products. I hope they were able to walk away with a wealth of knowledge and new information about fraction concepts and fraction operations! 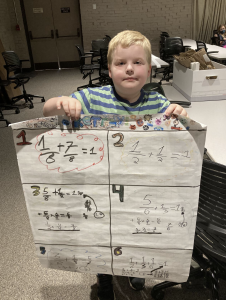 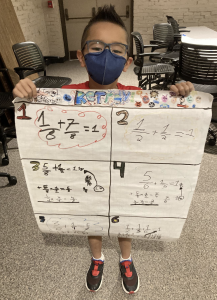 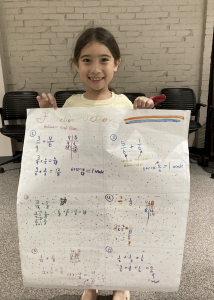 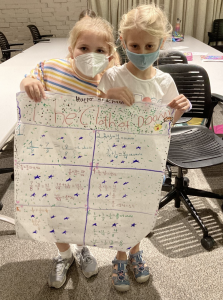 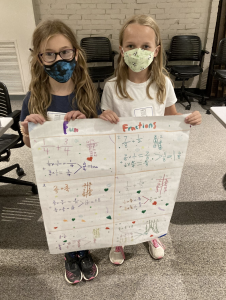 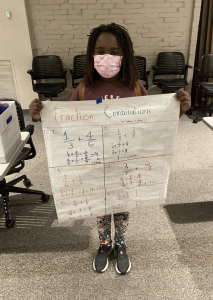 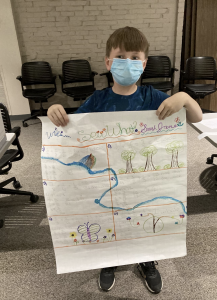 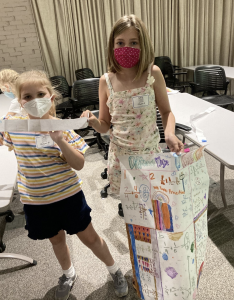 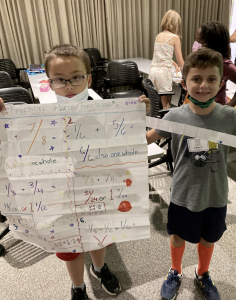 Thursday:  Good evening SAVY students and parents! Today, we were able to move into Chapter 2 of our fraction unit.  Tori and Jordan continue to explore their grandmother’s attic. In the first lesson, using a scenario of selecting remnants of cloth for one of the customers at the Rabbit Hutch General Store, the emphasis is on finding combinations of fractions that total 1 whole.  Students used benchmark fractions as well as invented algorithms to verify their predictions.  Heavy emphasis was placed on making sense of fraction operations and creating algorithms that support this understanding.  Fractions with and without common denominators were added together to make a sum of 1. Students built upon their understanding of equivalent fractions from yesterday’s lesson to construct new algorithms that would help them master adding and subtracting fractions. Students worked together to create posters that demonstrated their understanding of various ways to combine fractions that were equal to one yard, more than 1 yard, and less than 1 yard.

The afternoon was filled with deepening student’s understating of addition and subtraction of fractions and mixed numbers as they solved a variety of Magic Square puzzles.  The puzzles were designed to help strengthen problem-solving skills and improve strategies used in computing fraction operations.  Students were encouraged to use a variety of methods such as estimation and paper-and-pencil algorithms for these operations.  Parents BEWARE: some students asked to make a blank copy to take home and give to their loved ones to solve! I’m super excited for one more day of learning all about fraction concepts and I’m also proud of the tenacity and grit the students have showed as they work through unchartered territory.

Wednesday: Good evening SAVY students and parents! The emphasis on today’s lesson was to develop a variety of techniques that allowed use to effectively compare and order fractions. Using the least common denominator is one way to do this, but it is not always the most efficient strategy to use.  Common numerators, common denominators, benchmarks, and missing parts of fractions are strategies that we used today to help the students strengthen their number sense.  Students learned the strategies and then determined which strategy was the most appropriate for comparing any given pair or group of fractions to deepen their understanding of fractions.

Students worked in teams to come up with some fractions on an index card. Teams worked together by placing the index cards in order from least to greatest on the clotheslines that were hanging throughout the room.  Benchmark fractions (0, ½,  and 1) were placed on the number line to provide students with a guide as they ordered their fractions.  Students shared their strategies that worked best for their group and we also discussed any discrepancies we might have noticed as we visited each group’s clothesline.

We closed the day with “Candy Bag Capers.” Students were given a set of bags that had been labeled with a variety of fractions.  Students were able to identify the heaviest bag and the lightest bag by using the strategies learned throughout this week. Some students drew visual representations of their fraction comparison while others used a number line to help them compare and order the fractions presented.

I’m very excited to keep diving deeper into fraction concepts as tomorrow’s lesson will be all about performing operations with fractions!

Tuesday: Good evening SAVY students and parents! We continued today’s adventure with another story from Tori and Jordan’s grandmother. In the attic, we discovered a newspaper article about their great grandfather and how his favorite bullfrog, Daddy Long Legs, had won two blue ribbons from the county fair.  We discussed some additional frog facts which then lead us to using adding machine tape to mark the distances different frogs jumped at the fair.  Students were given blank adding tape that was 3 feet in length. They were challenged with the task of identifying where to find 1 1/3 on the blank adding tape without using a ruler.  Students used folding strategies and the fractions strips from yesterday’s lesson to help them determine the appropriate fractional units needed to develop a number line.  Upon completion of the number lines, we discussed key concepts such as improper fractions and mixed numbers.

In the afternoon, square paper was used to build our SUPERFROG.  Team members took turns as one team member made their frog jump and the other team member measured the distance. The best jump out of three jumps was recorded.  Students were able to use their number line labeled with fourths to measure their frog jumps.

Did you know this about frogs?

I’m super excited to see what else we can find in grandma’s, “Attic of Treasure,” tomorrow!

Monday: Good evening SAVY students and parents! We are off to a great start learning all about fractions.  In our first activity, students created a set of folded fractions strips that they will use throughout the unit.  These fractions strips are a visual representation of the fabric strips describe in the story about grandmother’s, “Treasures in the Attic”.  Please ask your child to describe how they have folded these strips, patterns noticed, and how we used the strips to help us identify equivalent fractions.  Some other key terms that we talked about include: numerator, denominator, and unit fraction.  Students discovered how equivalent fractions can be found by multiplying and dividing the numerator and denominator by the same number.

The afternoon was filled with Math and Movement activities as we looked at images to determine which fraction visual didn’t belong with the others. Students did an excellent job supporting their ideas with evidence and respectfully agreeing/disagreeing with the thoughts of others.  The students are so full of questions and eager to gain as much knowledge as they can about fractions.  Please encourage them to keep the questions coming!

Tomorrow……Frolicking Frogs…..I can’t wait to have another adventurous day in the land of Summer SAVY!