Hello SAVY parents!  Another great day here at summer SAVY is in the books!

We began today’s session with a review of previous learning.  Students were able to complete a 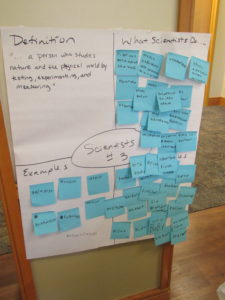 concept map about matter that connected all of the vocabulary terms we have been using all week.  In the first experiment, students were able to make a hypothesis about whether or not the properties of a liquid/solid stay the same when the size is reduced?  Most students wrote in their hypothesis that they did not think the properties would change and after the experiment they concluded that they were correct.  During the scientific investigation students were guided through all of the steps for conducting an experiment.  I’m proud of the way they were able to act like scientists and work through the scientific process during this investigation.

In this experiment the last three parts of the Wheel of Scientific Investigation and Reasoning were addressed.  The steps we covered today include: Design and Conduct the Experiment, Create Meaning, and Tell Others What You Found.  We were also able to create meaning by connecting this experiment to the oil, water and ice cube experiment. A group discussion about the kinds of changes that happened when I mixed the items together gave more meaning to the experiment.  Students were able to discuss how the physical properties of the ice cubes where affected once the ice melted and the food coloring filtered through to the bottom of the mixture. 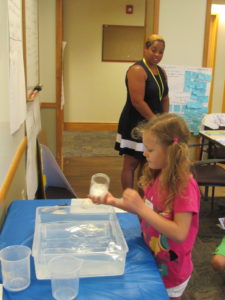 found in the kitchen upon arrival in the morning.  The substance looked like mayonnaise but was behaving as if where a solid.  Students recreated the mystery goop by combining cornstarch and water together.  Once the materials were mixed to the appropriate consistency the students were able to make a ball and noticed once they placed the ball in the palm of their hand the substance dripped off their hand as if it were a liquid.  A new term was introduced to the students: “suspension”.  While most argued that the substance should be classified as a liquid other students defended the idea that it was more like a solid by giving specific descriptions of how the mixture reacted dependent upon how it was being handled.  Students were told how water and cornstarch do not mix well therefore, when the mixture was let go it acted more like a thick liquid, meaning that the molecules relaxed and were not as compact as a solid.  This means that the cornstarch molecules glob together and are suspended in the water.

Thank you for another great day here at summer SAVY! Please let me know if you have any questions or concerns!