Day Three in Journey through Time started with a return to the English Channel and the fate of the Spanish Armada.  We looked at two versions of Elizabeth I’s famous Tilbury Speech as she awaited the expected invasion of the Spanish.  We considered two different videos, one featuring a performance of the actual speech and the other a heavily altered version of the speech for a Hollywood movie.  We discussed the key differences between the two and considered some possible explanations for why the changes were made. 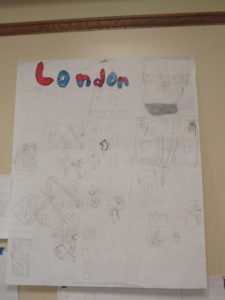 was defeated.  We focused on Virginia and the assumptions of the English, including the idea that the Native Americans in the area (the Powhatans) would welcome their arrival.  To think more about this, we compared life in a Powhatan village to life in London and asked the students to consider some positive and negative attributes of both societies.

We ended these discussions by noting the importance of perspective in these considerations, which pushed the class towards a more realistic understanding of what the Powhatans probably thought about the English.  We talked about why peace between the two sides was so unlikely and then looked at Powhatan efforts to destroy the English colony, which culminated in the famous surprise attack of 1622 – an attack which forever changed relations between the English and the Native Americans in the area.

In these discussions, we paid particular attention to the harrowing conditions in early Jamestown.  Diseases and illnesses were both common as was starvation.  We emphasized this as way to understand how important the discovery in 1614 that tobacco could grow in Virginia was to the ultimate survival of the colony.

Tomorrow, we’ll return to the topic of tobacco and connect it to the rise of political freedom in the English colonies and ultimately the Unites States.