We began class today by delving deeper into the problems studied yesterday. Each day will begin with two questions designed to have the students apply the knowledge learned in the previous day to a new scenario. Today’s questions dealt with the 21-card game and ZipZap, and both questions led to interesting discussions about factors, multiples, and divisibility rules. Students learned that there actually is a divisibility rule for 7! We also got to discuss negative numbers in the process of working through a few examples.

In the later parts of the morning, we looked a dice game called “Petals Around the Rose.” It involves being able to decipher a riddle through understanding various rolls of the dice. This proved challenging for many, but we made some headway as we struggled. We learned what the roses were, and gradually we had built enough knowledge to be able to solve the riddle. The game can be played here if you are interested: http://www.freeworldgroup.com/games/roses/

In the afternoon, we started investigating my favorite puzzle: the nonogram. It was awesome to see student enthusiasm grow as they learned more tricks for solving these puzzles. We focused on what had to be true instead of what we hoped might be true. We will investigate some other types of puzzles as well over the rest of the week. This website contains nonograms of various sizes: http://www.puzzle-nonograms.com/ I even shared one I had created myself, so students might want to try to do the same if they are so inclined! 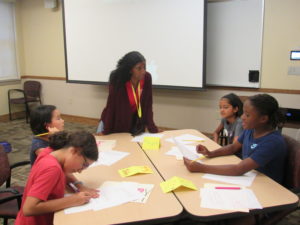 The final problem we investigated today involved determining how many ceiling lights out of 20,000 would be on after one person pulls every chain, another pulls every other chain, the next every 3, and so on until finally the last person just pulls the 20,000th chain. A common theme to several problems we have solved thus far is the creation of a similar but simpler problem to see what patterns develop. Students used playing cards to model these lights and noticed several patterns, some of which led nowhere and others led somewhere but very slowly. Ultimately, we determined that all lights that are perfect square numbers are on. We then delved into why that was the case, but some of those secrets remained elusive for now.

All in all, it was another successful day in Puzzles and Problem Solving. There was some mathematical frustration, and there was some mathematical celebration. There will be plenty more of each the next three days. We wrapped up the day with some more ZipZap. We’ve managed to count to 44 as a class and hope we can surpass that mark later in the week. Tomorrow we will begin tackling one of my favorite all-time math problems. I’m excited!