Hello SAVY parents!  Students were able to create a foldable that would allow them to remember the various types of graphs we have been using to record data. Today, our vocabulary terms to study include: linear relationships, average, slope, intersecting line, horizontal line, and vertical line. I am very pleased with how the students have been using the mathematical terms learned when we are having whole group discussions. 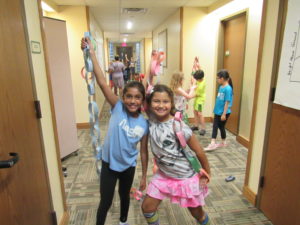 In the morning lesson, students were able to extend the previous day’s Chain Gang record.  The data from the charts that were developed were translated into line graphs to illustrate each scenario.  Students were able to identify the rate of change and note that it is unlikely that anyone could work at a constant rate for hours at a time.  Looking at the shape of the graphs allowed the students to determine the rate at which the participants were working.  A curved line would indicate a non-linear relationship between the variables.  The curved lines are also results of graphing rates that show when someone has slowed down, sped up, or stopped altogether.  We also were able to look at a scatter plot and determine the line of best fit and the purpose of that line.

In the afternoon lesson, students looked at data from a mythical school’s penny drive to determine which class in the school will collect the most money by the end of the drive.  The records start with varying amounts of money already collected and then pennies are collected at a constant rate for several days.  The class with less money at the start collect money at a faster rate than the class that begins with the greater amount of money.  Students again make tables and graphs to compare the two situations.  They find that the class that ends up with the most money will depend on the number of days that the penny drive lasts.  Again, both situations involve linear relationships (pennies being collected at a constant rate), but the different rates of collecting pennies give the graphs different slopes.  Initially, one class is ahead, but after a certain number of days, the second class has a greater collection. Students analyzed the intersection of the two graphs to determine when the two classes have collected the same amount of money and compare this to tables and various scenarios.

As our session is swiftly coming to an end please remember to log the daily pages each student reads as we attempt to create a record of 10,000 pages read by the last class meeting. Our running total of number of pages read so far is 5,510 pages. Thank you so much for another successful day and I look forward our last summer session of fun and learning.

Thank you so much!