What a great detective adventure we’ve had this week! Our sleuths brought their A game to this week’s historical mystery.

We kicked off by comparing the goals of detectives and historians and the processes that they follow to achieve those goals:
1) Identify the mystery or major question
2) Conduct background research
3) Hunt for clues–and we talked about how this might differ for historians and detectives
4) Analyze clues, keeping an eye out for red herrings and extraneous information
5) Proposing a theory or argument.
Everyone had such great examples from the stories of detectives like Hercule Poirot, Miss Marple, Harry Potter and his friends, the Hardy Boys and others. Then, we put these steps into practice with this week’s mystery.

Our quest for the day: Who fired the shot at Lexington Green that famously began the American Revolution?

First, we considered the important background information. We followed the story of the growing discord between patriot colonists and the British parliament from the Boston Tea Party (where we left off last week), to the Coercive Acts, to the First Continental Congress, and to Gage’s decision to march towards Concord on April 19. We discussed the enormous transition that was taking place in the way the British colonists understood themselves. At the First Continental Congress they took the first steps towards thinking of themselves first as “Americans” instead of as “Virginians” or “New Yorkers,” for example.

Second, we dove into the clues. Our detective historians examined the accounts of 5 different individuals who were present at Lexington Green the morning of April 19 when the shot heard round the world ignited the conflict between colonial militiamen and British soldiers. Our sleuths made charts comparing the following information about each source: who the author was; when he wrote the document (all of our authors were men this week); what they described; and any observations or analysis that the detective historians wanted to make about the source.

Then, using their charts, in three groups, our detective historians developed their own arguments about what actually happened on Lexington Green, and explained their arguments by illustrating them on posters. As living proof that historians can use the same information to come to different conclusions, our historians came up with three different theories. The first group said that there is not enough conclusive evidence to know who fired the first shot. The second group said that it was likely fired by an American, but that we don’t have enough information to know exactly who did it. The third group found the similarities in the British sources suspicious and argued that the first shot may have been fired by the British.

Great job everyone! It will be exciting to see our sleuths delve into another mystery next week!

Photo from our Day 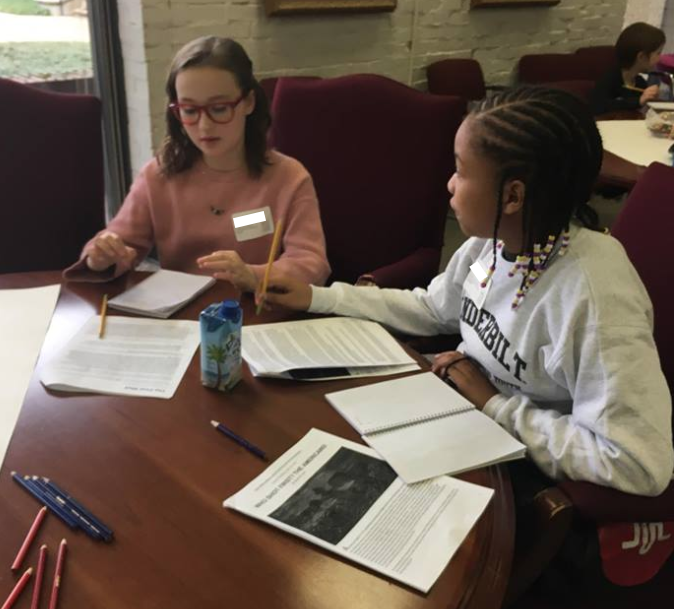