The first day of our class had a great start. After getting to know each other, the students organized what they already knew about robots and programming by writing them down and connecting them on a paper in form of a concept map. Afterward, we talked about how a computer works and how computer programs as a system interact with outside entities through inputs and outputs.

After we got the basic out of the way we did graph paper programming. The students used this opportunity to instruct their friends through code to draw an image. Through this activity, they were introduced to computer bugs and the process of debugging a program. They also learned how computers can only follow direct, clean and defined instructions and no more. Since it is very important for programmers to be able to work with their coworkers efficiently we did a fun extension to graph paper programming called relay programming. By collectively writing a set of instructions for a single task they learned the importance of writing clear and bug-free work since they had to rely on the previous coder’s work to finish the game quickly.

Algorithms are everywhere and we use them all the time. We learned about algorithms through a real-life example of getting ready for breakfast. We also defined algorithms for our programs and for different tasks in class such as moving between the computer lab and the classroom.

Once the students had a good understanding of basic computer science concepts, we started programming different characters using blockly visual programming language to solve different puzzles. During the course of going through the puzzles, they added two programming control statements, loops and conditionals to their coding tool belt. After they were comfortable to go through the puzzles on their own, they learned how they can work in pairs to solve harder puzzles faster by taking two different roles, the navigator and the driver. We also used code to draw lines and shapes on the screen which was not only fun but also we got to use it as a point of reference for later when we work with the Sphero robots.

We also had a lot of fun with the robots and learned how to control the robots and ourselves. The students then programmed the robots to draw their initials with varying degrees of success. Ask your students these questions: Why was it easier for the robot to draw some letters versus the others? Why is A harder to draw than O?

Photos From Coding Practice in the Computer Lab 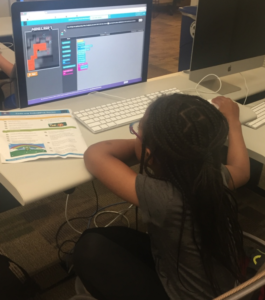 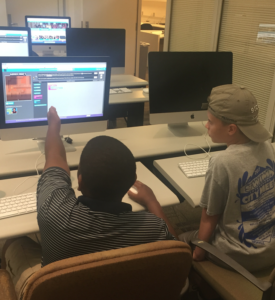 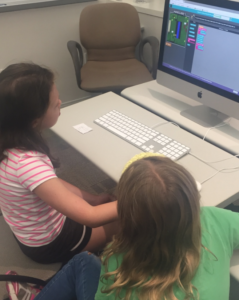