Our first day in Neuroscience Navigators was awesome! We started the day with an ice breaker to learn each other names and what we already knew about neuroscience. It turns out we knew a little bit, but not much, so we are super excited to learn a lot this week!
We broke the word neuroscience down into neuro-, which refers to the nervous system, and -science, which involves applying the scientific method to learn something new about the world. We then discussed the chain of steps involved in the scientific method; defining a problem and making observations, using inference to form a hypothesis and make predictions, then carrying out an experiment to test our hypotheses and make conclusions from our data. A final important step is, of course, to communicate our results! These steps will become important later in the week when we design our own experiments about a brain health topic.
After that, we dove right into neuroanatomy and found there are a lot of new words to learn in Neuroscience. From the brain, spinal cord, and cerebellum, to different orientations used to talk about brain areas (e.g. superior to inferior) and views from which we can look at the brain (e.g. axial or coronal).  We finally learned about the different lobes of the brain and how they contribute to different functions.
Now that we had our bearings, we constructed brain hats which fit over our head and describe the different brain parts. The gyri and sulci look similar in different areas, so we really had to pay attention to make ours anatomically accurate and be sure the hemispheres were mirror images of each other!
The last thing we did today was to begin our build-a-brain activity. We talked about how the human brain compares to other animals, in terms of size and number of cortical neurons. See if your navigator can remember what is most important for intelligence (hint, an elephant’s brain is much bigger than a human’s)!  We also learned some differences between dog and cat brains. These concepts will become important as think about our imaginary animals and the brain structures most important for the kinds of behaviors in which they engage. It was great to finally kick off our navigation into all things neuroscience, we have a fun week ahead of us!

Pictures From Our Day 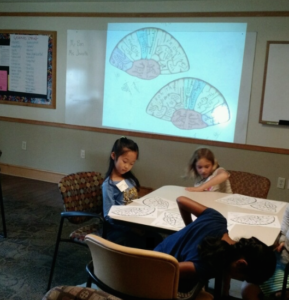 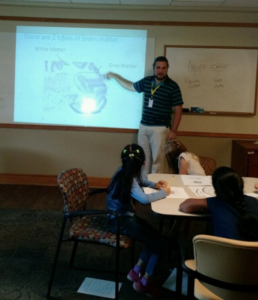 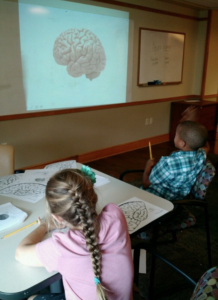 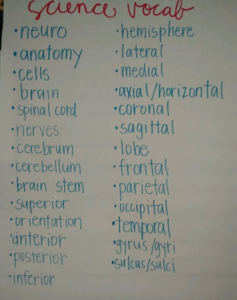