We had another wondrously suspenseful day in Mysterious World of Writing today!

In the morning, students started off the day with a quick round of Storycubes and Plot Diagramming. We reviewed all the elements of a literary story structure: exposition, rising action, climax, and resolution. At their tables, students were given two Storycubes die and asked to roll (one roll per student), adding a detail to a mystery, thus building a continuous story — with all students involved in telling (creating!) the tale.

We followed up the Storycubes exercise with a round robin-style Freewrite. Students were given the first line from Louis Sachar’s Holes, “There is no lake at Camp Green Lake.” and asked to continue the story from here. After writing for a few minutes, they passed their papers to left, and the next person continued the story. The goal of this exercise was similar to that in Storycubes: to help students understand the surprise involved in the process of writing, and to also understand the project of tone/voice/style. Most students expressed that their stories took very different directions than what they had originally anticipated, and some students also commented that they found themselves trying to mimic the tone set in each story’s beginning.

This provided an excellent transition into a lesson on Mood and Tone, which our TA, Miss Cristina, taught. Students were asked to consider what it means to: Read like a writer, vs. Read like a reader. We discussed the simultaneous blessing and burden of being writers who read — we must constantly analyze, ask questions, read in order to understand the stylistic choices and diction at play in a story, in addition to reading “like readers” (for pleasure). To read like a reader, an essential question might be: What does this story mean? To read like a writer, an essential question may be: What is the author’s intent? Considering both of these questions together helps give the reader a fuller sense of mood (how the story makes one feel) in addition to tone (how the author feels about the characters). And keeping both of these questions in mind as we read ultimately leads us to fuller, richer writing, and deeply empowering reading lives.

We moved on to Foreshadowing and Imagery. Students read passages from Holes, by Louis Sachar, and The Hardy Boys: Footprints Under The Rug, by Franklin Dixon. They were asked to make a list of the specific images (with page numbers!) that Sachar and Dixon employ, and how these images draw upon sensory detail. They also were encouraged to write down what they, as readers (who read as writers!) foreshadow might happen, pointing to specific lines or passages. Students noticed that there were instances of imagery foreshadowing a future event, and we paid special attention to language such as “The dark figure leaped and plunged…” (action, juicy verbs hinting at something ominous to come!) and “He would be thirsty for the next 13 months” (a more quantitative detail signifying a character’s future conflict).

In the afternoon, students learned about Red Herrings (clues or pieces of information intended to be misleading or distracting!). (The origins of the term, interestingly enough, are borrowed from the custom of training dogs to hunt using the scent of dried red herring, which turns red from being smoked.) Students discussed how to construct different types of red herrings in literature — red herrings, for example, could take the form of characters who might be more suspicious than they are; objects that might have more significance than they actually will; or even events that are seemingly important…but turn out to be secondary. Students spent some time constructing their own red herrings for their mystery short stories. I’m sure they would be delighted to talk about their red herrings with you all at dinner tonight!

Students also learned about using Deductive Logic in mysteries. We discussed premises, drawing conclusions, and the act of narrowing out information based on what you already have. Deductive Logic is a useful tool for critical reading, and students were excited to review the differences between brainstorming and critical thinking — how deductive logic might factor into both!

To read literary examples of both red herrings and deductive logic, we turned to Scene II of Agatha Christie’s The Mousetrap today, and once again, we read this section out loud as a class, with different students playing different character roles. We paused every few pages to reflect upon the context, action, and suspense-building that Christie generates (pointing to specific passages and moments in the text). Parents, students seemed so very excited about this play (we reached a spicy cliffhanger at the end of our reading period today!) – I’d encourage you to discuss Christie’s play tonight with your students. The Mousetrap, as it turns out, is the longest-running play in history! You might ask your students: What elements of the play [do you think] draw audiences year after year? What would make you want to see the play? Does reading it make the prospect of seeing it more or less appealing? Why?

After our reading and a short snack break, students then got to writing. We had a lesson on Suspenseful Dialogue, and discussed different usages of suspicious dialogue within mysteries — having characters lie, say something bizarre, or withhold information, for example. We also created a classroom word wall for students to add this week’s key terms to, and so they have a visual reference to refer back to, and apply techniques learned to their writing. Students took time to work on their short mystery stories.

Students had writing time in the last period of class to work on their mysteries, and were encouraged to synthesize all the elements of mystery genre they have learned so far into their own works! Finally, we reviewed “Making Your Reader Your #1 Detective” and the “puzzle mystery” genre — how to make your reader engaged and solving puzzles (through clues, red herrings, etc.)

I am looking forward to seeing the final results of their creations! We’ve had such a creative, fun day today, and I can’t wait for more. 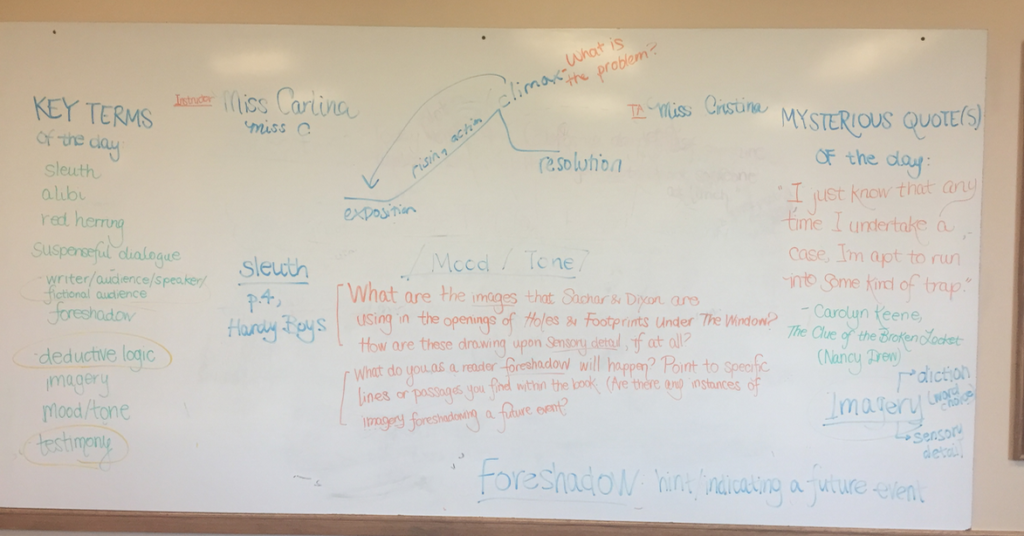 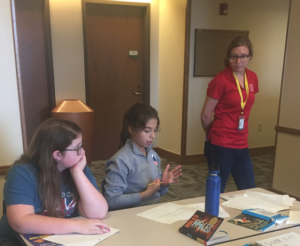 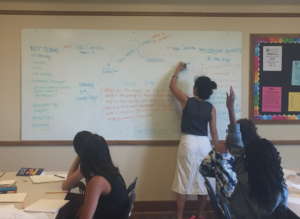