We began Math and Music today by splitting up into two teams and laying the groundwork for our John Cage trial later in the week. I was impressed with how well the students worked to come up with their respective definitions of music! Of course the two sides will be presenting different definitions as they try to argue either in favor of or against “4’33”” being music, and I look forward to seeing how it plays out on Friday! We will begin each day with a period of trial research and preparations.

The rest of the morning was spent learning about musical notation and intervals. In addition to the treble and bass clefs, students learned that there are several other clefs that exist but are now rarely used. Unfortunately, we did not have any violists in the room to argue for the necessity of alto clef!

In the afternoon, we read our first excerpt from Godel, Escher, Bach: An Eternal Golden Braid by Douglas Hofstadter. We will be looking at three of the dialogues from this book as jumping off places for musical and mathematical discussions. I was quite amazed by student enthusiasm for the Desmos graphing calculator. I had really intended to spend about 5 minutes looking at mathematical translations, but students kept asking great questions, and we ended up spending almost 40 minutes there! I was inspired by the students’ enthusiasm for learning challenging algebraic concepts!

The end of this particular reading gives an assertion of how Johann Sebastian Bach might have felt about the music of John Cage, specifically “4’33.”” Students wrote a brief response at the end of the day that asked them to address what they thought Bach would think of Cage. I am interested to read their thoughts tonight!

All in all, I was quite pleased with the day’s work! It was, in many ways, a more challenging day than day one, but it was so interesting to see the things that they were interested in and wanted to explore. I’m looking forward to exploring more of these things with them throughout the week! 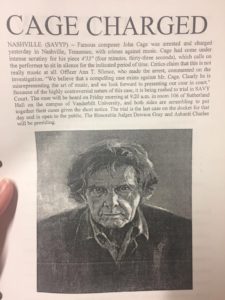 Our Prosecution and Defense Teams, Respectively, are Readying Their Case for Trial 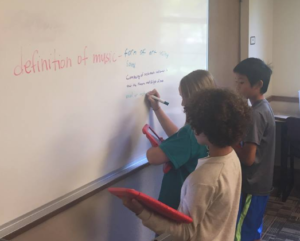 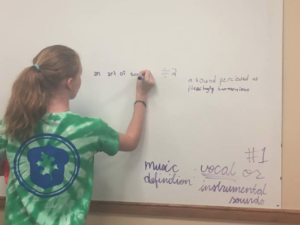