On our final day in Puzzles and Problem Solving, we looked at a couple of gold coin problems where students had a certain number of weighings on a balance scale to try to determine which coins were fake. Students quickly solved the nine-coin problem and set to work on the five-coin version. You would think the five-coin version would be easier, but there are multiple counterfeit coins in that one!

We looked at a Sudoku that has no numbers in it at all, instead using the letters A-I. Students did well to solve this, and, while we did not complete them, we briefly glanced at a couple of other examples that make use of other symbols. We also completed another set of rebus puzzles and started our biggest nonogram to date: a 15×15. A picture of our partially completed puzzle is provided at the bottom of this post. Feel free to complete it!

If you were unable to attend Open House, we opened the event by trying out the Birthday Problem. While initial student guesses were all over the place (as expected!), we managed to find a birthday match in the room in 31 people.

Thank you all for a great week!

Showing Off Our Work at Open House 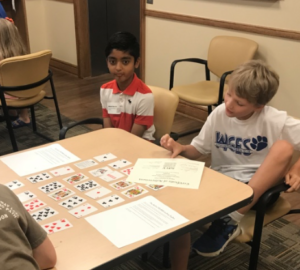 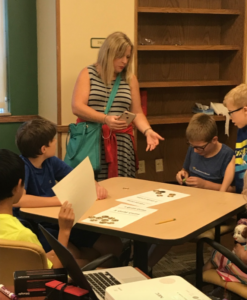