I was so impressed with the students’ work on the Pirate Problem this morning! This is a problem that my (much!) older students often struggle with, and this class tackled the issues head on and found a solution. It was amazing to see their enthusiasm as they neared the answer and weren’t ready to be finished with the problem.

As I have said many times, the answer to the original problem often just raises more questions, and some groups began investigating what would happen if we added more pirates to the picture. The original problem had 5 pirates, and tomorrow we will extend the problem into the hundreds of pirates!

We revisited our Polar Bears and Fish riddle right before lunch, and it was awesome to see the solution click for so many students! There was, of course, the typical moaning and groaning, when I brought the problem back out, but they quickly refocused and were able to complete the task! I was amused to hear a couple of students say, “Oh man, I forgot to Google this last night.” How much more satisfying it is to solve it yourself!

After lunch, we spent some time looking at rebus puzzles. An example of a rebus puzzle would be “STA4NCE,” where students noticed the four inside the word stance and were able to translate that to the phrase “for instance” (four in stance). Some of these were much more challenging, and several students took the opportunity to create their own. I loved seeing their creativity! My personal favorite was a rendering of “to infinity and beyond!”

During the final part of the day, we looked at arithmetic logic puzzles like “ELF + ELF = FOOL,” in which each letter represents a unique digit every time it appears. We gradually increased the difficulty level until we got to my favorite example of the genre: “SEND + MORE = MONEY.” Unfortunately, we had about 3 minutes to discuss this one, so it clearly went unsolved for the time being. Ask your student about it!

It is hard to believe that class is almost over! There are so many things that I want to do tomorrow, and I wish we would have time for them all. There are also a few loose ends to tie up from our previously investigated problems, and we will study at least two new problems. I look forward to meeting many parents and guardians tomorrow at Open House, and I am excited to share some of the awesome things these students have done this week! 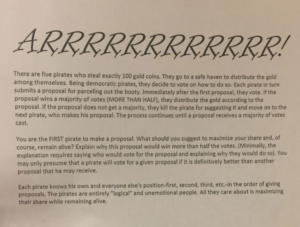 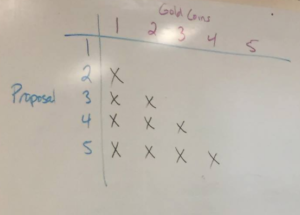 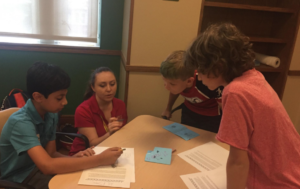 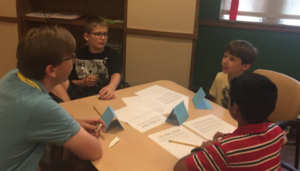