We spent the morning learning all about how anthropogenic (man-made) noise affects animals and their ability to communicate. Students split up into small groups and were assigned readings on distinct impacts of anthropogenic noise on animals and ecosystems. For example, one group read about how traffic noise causes stress in tree frogs, as it impedes their ability to communicate, while another group read about how noise from natural gas compressors can affect even the smallest of animals (insects and spiders) and influence their community structure. We were extremely impressed with how well your students worked together within their groups to obtain a complete understanding of their assigned article. They revealed that understanding when they taught the rest of the class about what they had read.

Following this exercise, students remained very curious about the different ways that anthropogenic noise influences animal communication. Specifically, a question asked by one student–“Could these bird species evolve to avoid the noise?”– led to an amazing class discussion about the challenges faced by animals trying to be heard above the din. Students were quick to point out that birds and frogs could try to signal louder, shift to a higher pitch, or move to a quieter area. However, evolutionary changes to escape noise take many generations, and current physiological limitations (such as how big animals can’t generally make high pitched songs) may prevent some species from escaping low frequency noise caused by traffic, or loud machinery.

Following lunch, we conducted an experiment outside to see how the community would respond to different predator calls. We conducted species surveys and behavioral observations before and after playbacks of a red-tailed hawk and a Cooper’s Hawk. Students noticed that following playback of predator vocalizations, rabbits, robins, and starlings tended to freeze and stay silent. Some birds produced alarm calls, like this robin seet call.

Following the debrief of our experiment, student’s had a blast trying to imitate birds using the Spectrogram on Google Chrome’s music lab. Using the live spectrogram, projected on the wall, we allowed students to randomly choose a birdsong prompt from Cornell’s Merlin app. We then played the song through an external speaker so that it was picked up by the computer’s microphone and displayed for the whole class to see through the web app. The student then did their best to imitate the bird, allowing us to discuss differences in the physiology of birds’ singing apparatus (syrinx and beak), compared to our larynx and mouth. We were shocked when one student PERFECTLY imitated a mourning dove song and another produced such a faithful rendition of a brown-headed nuthatch call that no one realized the playback had ended! To illustrate how human noise makes it difficult for animals to communicate, we stepped up the challenge, where students had to imitate bird calls that were overlapped by the sound of traffic, construction and other man made noises.

For the rest of class, we focused on technological and behavioral solutions to the problem of anthropogenic noise and explained the final projects to students. In the groups from this morning’s readings, students will develop a campaign to inform and animate the public about their particular impact of noise. After some brief information about how effective science communication should be designed, and some practice critiquing outreach flyers, students developed slogans. Groups presented their slogans to the class, and the winning slogans will be used in a flyer, as well as a poster or video which the students will develop tomorrow. There were some contentious decisions and many great ideas, and are excited at the level of student engagement in these topics.

We are so excited to see what students produce!

Students were adamant we include all the links, so here they are: 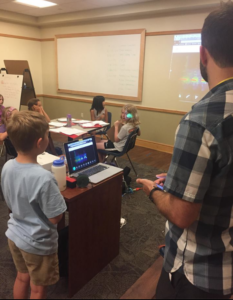