Today we were all field biologists! We started the day observing animals communicating on campus. We observed squirrels chattering, robins and cardinals singing, chipmunks peeping and much more! During this activity, students marked the location of the animals they observed on a map of campus. Students were much better at orienteering than many adults! Using data sheets, students paired their mapped observations with detailed accounts of each animal’s species, behavior, and vocalizations. They also practiced using binoculars and explored various animal field guides as they attempted to identify different bird and insect species. Because the students were so curious and excited about all of the animals that they were observing, we ended up spending almost the entire morning outside exploring!
To aid in their development as fledgling naturalists, students began making their own detailed field guides of local urban species! To fill out their guides, students used a Padlet wall to research the scientific names, habitat preferences, types of vocalizations, studied spectrograms (visualizations) of song recordings, and even developed mnemonics for remembering what the animals sound like. For example, they learned to distinguish a Robin’s song from its alarm call, and came up with phrases like “cheerily, cheerio, chiminey” that transliterate the sounds to English.
Following this activity, we challenged the students’ ability to identify animals by only hearing their vocalizations. You can test your child’s knowledge at home with this web app Dr. Matt put together.
We ended the day learning about cultural drift and how animals signals can evolve over time randomly. To illustrate this concept, we played a version of telephone to see how a phrase (representing a species of a bird’s song) can randomly change over time (as shown for savannah sparrows in this video). In the game, transfer of a message to the person next to you represents transfer from parent to offspring. In one version of the game, we split the class into two different “founder populations,” simulating separation of two bird populations onto different islands. They began with an ancestral “song” (the nonsensical seed phrase “Crunchy Jibber Mints).” In one population, this morphed into “Crunchy crunch bouncy peppermints” over 13 generations. On the other “island”, the song transmogrified into this bit of randomness: “Why did Dee stop in front of the truck?“ One of these generations involved a huge mutation step 🙂
To finish the day, Dr. Matt connected the cultural evolution game to his research showing rapid changes to song structure in a new subspecies of barn swallow that recolonized Siberia from North America about 30,000 years ago.
We were very impressed with students’ performance and engagement today and we hope they will continue to build on their wildlife guides on their own and to learn about the animals around them. If your student continues to fill out their field guide and wants to share, we would love to see them! Feel free to email them to savy.pty@vanderbilt.edu.
Tomorrow, we may be observing some wolf spider courtship behavior (if we have survivors from a shipment from our collaborator at the University of Nebraska), and we’ll be diving into multimodal signaling and much more!
-Dr. Alissa & Dr. Matt

Pictures from Our Field Trip to Observe Animals in Nature 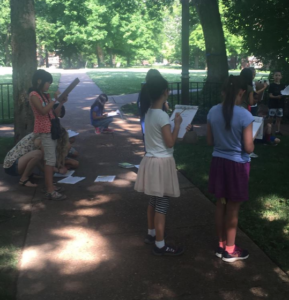