During our fifth week of SAVY, we learned more about a few physical properties of matter: mass and volume. We learned that mass is the amount of matter in something. It’s closely related to weight, but weight is gravities effect on a matter’s mass. So on the earth and the moon a person would have the same mass, but because gravity is less on the moon a person would way less. Mass is measured using a balance, so we learned how to correctly use a balance and measured the mass of several different objects like a nickel, ice, and a crayon.

Next, we learned that volume is the amount of space matter occupies. For some of us, this definition of volume was new because we typically think of volume as the intensity (loudness and softness) of sounds. It’s great when we can learn new meanings of words we already know! Volume can be measured by measuring the length, width and height of an object and multiplying those numbers together. This formula works well for objects that are squares and rectangles, but not so well when an object is non-uniform. To measure the volume of non-uniform objects we learned that we can use a water displacement method. To test this technique, we first went on a field trip outside to collect rocks and sticks as our non-uniform objects. After taking note of the volume of water before the rock was added and after the rock was added, we could find the volume of the rock. We worked as a class to solve of these more difficult subtraction problems, and I’ve attached a picture of the board work for some of the problems. We mostly used a number-line method, and your children did an excellent job! 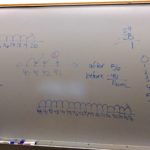 Looking forward to next week where you can join us in the classroom to see and learn about some of our experiments over the last few weeks!