WEEK 2
———————-
We figured out how to build a planetary system today in Planetary Astronomy!
At first, we set the stage with the age of the Universe (~14 billion years) and the age of the Solar System (~5 billion years) and that we know the Solar System’s age through analysis of meteorites. The students did get to see some real meteorites that I have! Meteorites can be found at rock/gem shows/shops and reputable internet sources. We discussed the evidence for the dinosaur extinction-by-asteroid also.

Then we delved in to the patterns of the Solar System which are the evidence scientists need to make computer models to do “experiments” to figure out how the Solar System (and therefore other planetary systems) formed. We looked at some animations showing the start of formation – the collapse of the giant cloud of gas and dust to a flat spinning disk (Solar System formation and Planetary Formation Process and Planetary Formation: James Webb Space Telescope Science). A supercomputer simulation that shows planet-building is here: Planetary System Formation Simulation (200 AU View). With each of these videos there are also often some good suggested ones (and some terrible ones so just be choosy). 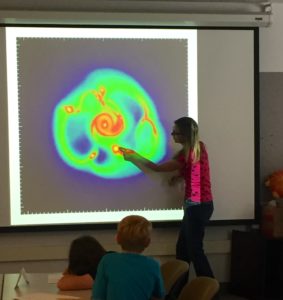 While talking about the formation of planets, a student mentioned they’d heard that the Moon was formed by planets crashing together so here is one of my favorite videos on all of the internet: How the Moon was Born. Students designed comic strips to tell at least part of the story of the formation of a planetary system so check those out!

We also got to talking about extrasolar planets and how they are named so here is a link to the International Astronomical Union Name Exoworlds page and here is the neat names graphic the kids saw.

Last but not least, we looked at the “fingerprints” that light can show us using diffraction gratings (example, example). These fingerprints are called “spectral lines” and every element has them. Astronomers use spectral lines to determine the composition of objects, how much objects are moving toward/away, how fast objects spin, how much of a magnetic field an object has and all sorts of things. It’s also my personal field of study so I love breaking up the light into various components 🙂