On the third day of Neuroscience Navigators, we moved away from the big picture of the brain into its minute details – that is, neurons (or brain cells).

We had previously learned about gray and white matter – but how are they structured? We took several different approaches today to “dissect” the cellular structure of the brain. First was basic visualization with paper and (color) pencils to delineate parts of a given neuron. Next, we compared our drawings with real neurons as observed under the microscopes! We got to see from individual (stained) neurons to a rat embryo, where we saw the fine development of the spinal cord.

In addition to drawing individual neurons, we also made neurons out of pipe cleaners – and brought them all together to make a network of neurons, mimicking a real-life brain circuit. Each part of the neuron – e.g. dendrites, cell body, axon, and myelin – was all a different color to highlight the complex details of the cell.

We also learned the important role that each of these parts played to contribute to the whole brain circuit. For instance, upon receiving “messages” (i.e. neurotransmitters), the dendrites communicate with the rest of the cell body to initiate an electrical pulse (i.e. action potential) along the axon to the synaptic terminals to release transmitters and, in turn, relay the signals to other neurons. This scheme of events was demonstrated using ping pong balls (as neurotransmitters), ropes (as axon and dendrites), and pipe (as action potentials), in our “action potential rope game”. Ask your navigator about this neural sequence of events!

Finally, to conclude the day, and to conceptualize how instantaneous (or not) a circuit of action potentials are, we performed an experiment for catching a ruler as dropped and to record our reaction times. A common hypothesis was drawn: dominant hand would be more reactive and catch the ruler faster. However, the results told otherwise and were varying: for some, their left hand, albeit not being the dominant one, was faster in catching the dropped ruler; for others, their right; and for a rare few, both their hands perform equivalently! The circuit from sight (i.e. looking at the ruler and predicting when it would be dropped), occipital lobe-motor cortex communication, to spinal cord and nerves was reminded to illustrate how one’s hand might respond fast – or slow – to catching the ruler.

We keep moving on and learning new things about the brain! Exciting lessons for tomorrow concern cognitive systems: how the physical brain manifests, for instance, intelligence and attention. Hold still – there is more to come! 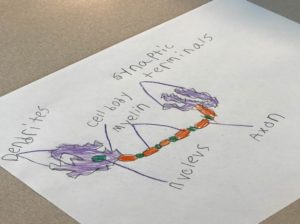 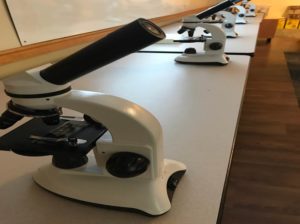 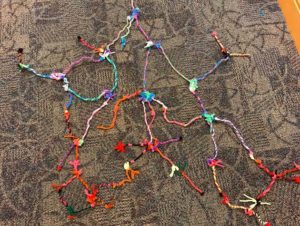