Fall 2022 Mentor Immersion mentorships will be announced later this spring!

On the second day of Neuroscience Navigators, we built on our knowledge of neuroanatomy by watching Mr. Ben and Mr. Tin each dissect a sheep brain and talk through all of the parts. They made a sagittal cut and we saw the Corpus Callosum, which is the structure that connects the left and right hemisphere. It is like a superhighway that lets them communicate. They made other cuts and we saw the brainstem and cerebellum. During the dissection, we were all able to touch the brain if we wanted to. Of course, we had on gloves (non-latex).

After the dissection lab, we talked about our senses and went over what the different lobes of the brain do, including the frontal, parietal, occipital, and temporal lobes as well as the motor cortex and the somatosensory cortex. If you don’t know what they do, the neuroscience navigators do. You should ask yours! They should have brought home their brain hats, which have little pictures on them that help remind us of what the different parts of the brain do. We used our senses to observe and record our predictions in determining what three mystery powders were (salt, sugar, and flour).

We then all went outside and competed with the other neuroscience navigators class to answer questions about which part of the brain helps us do the activity that our teachers were acting out. There was a giant brain on the ground and we had to run to the right part. It turns out that a lot of the time there is more than one right answer since we need most of our brain to do any activity. From vision to motor control to logical thinking, even picking up a pencil is a complicated task.

All of the neuroscience navigator teachers have experience with MRI’s, which stands for magnetic resonance imaging. So, we went over the the Vanderbilt Institute for Imaging Science where they do a lot of their science. We went over MRI physics and a little bit about neuroimaging methods. We saw an MRI of Mr. Ben’s brain. A few of us got to get in the mock MRI scanner to do a pretend MRI. It looks like a giant donut! We’re excited for tomorrow, where we’ll learn about cellular neuroscience! 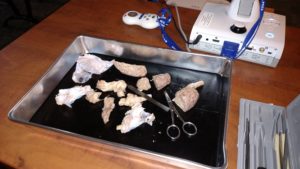 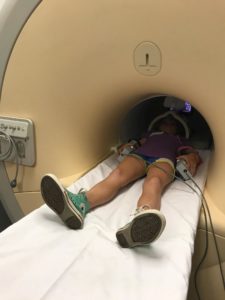