We had a wonderful first day in Neuroscience Navigators! We started the day getting to know each other and how much we all knew about neuroscience. We are also learning pretty quickly that there are a lot of new words that are used in Neuroscience. For example, the word neuroscience is a combination of neuro- and science. Neuro refers to the nervous system. Neuroscience studies mostly the brain and the spinal cord, which is the Central Nervous System. Science is the study of something using the scientific method. We learned all of the steps of the scientific method today, plus an extra one that sometimes get’s left out – Communicate. It is important to communicate scientific results with everyone.

After that, we dove right into neuroanatomy. The brain has a bunch of different parts and ways of looking at it. We used floss to make slices in brains made of jello. This makes it easier to look at a flat picture of the brain. You can cut it 3 ways to end up with a horizontal/axial slice, a coronal slice, and a sagittal slice. Take a look at our jello brains below!

After neuroanatomy, we got to work on our brain hats. We’re going to finish those up tomorrow, but we will end up with a hat that fits over our head that described the different parts. Many of the parts look very similar, so it is difficult to tell them apart. We really had to pay attention to the shape of everything.

The last thing we did today was to take a look at the real brain of a sheep. It is one thing to look at a paper brain or a jello brain, but looking at the real thing is very different. A sheep’s brain is pretty small compared to ours, but very large compared to a mouse. Everyone was wondering what the plastic on the outside was, and we learned that the brain normally floats in liquid in the skull and has a hard protective layer on the very outside called the Dura. We won’t be dissecting the brain, but we will get to poke it if we want and watch as our PI (that’s short for principal investigator, Mr. Eric and Ms. Renee) does the dissection. He’ll take the Dura off and we’ll make some slices tomorrow. 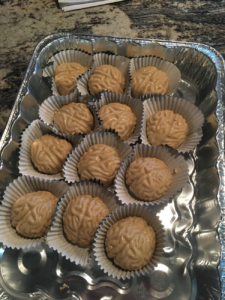