How can it possibly be the end of Day 3 already? Today, our budding archaeologists were faced with several situations that real-life archaeologists deal with all the time. First, we completed a fun activity to review the scientific method by hypothesizing what mystery materials I had placed inside plastic eggs. Students had to use their observations to make inferences as to the contents. Just like real archaeologists, some of the students had correct hypotheses, some did not, and some were partially correct! We also spent some time talking about the importance of understanding how and why some objects preserve in the archaeological record while others do not. This is one of the most critical aspects of the archaeologist’s toolkit! We discussed the difference between organic and inorganic objects and how this affects preservation. The students grasped these concepts quickly and then were given the opportunity to put this knowledge to use just like a real archaeologist! We examined dozens of perishable and non-perishable items around our classroom and decided what would survive in the archaeological record hundreds or thousands of years from now. Then, the students envisioned their bedrooms at home as future archaeological sites. What objects would remain intact for future archaeologists to study hundreds of years from now? Like real-life archaeology, how might this skew their interpretation of the function of the room and of the person (or people) who lived there? We also walked outside and created maps of part of Vanderbilt’s campus and then imagined how it might look as an archaeological site in the future. Finally, the students created brochures of an archaeological site of their choosing set hundreds (or sometimes thousands) of years in the future. I was really impressed with how well the students put the knowledge and skills they had learned throughout the day into the creation of these brochures! While our archaeological sites were imaginary, these activities allowed the students to experience many of most common and most challenging questions archaeologists face when studying real archaeological sites. It also stresed that artifacts recovered at archaeological sites are usually only a small portion of the materials that were originally used by the people who lived and/or worked at the site. As such, archaeologists only have a small piece of the puzzle to work with, and it is important to use the scientific method to fill in the gaps!

Tomorrow, we start our mock excavations!! 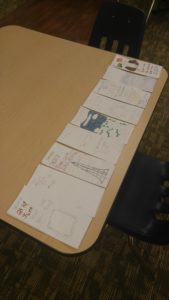