Most of the morning in Puzzles and Problem Solving was spent converting our classroom into an airplane…or at least a room with 16 seats and boarding passes. Consider the following scenario: The first person to board a fully-booked flight drops his or her boarding pass and doesn’t bother to pick it up. The person doesn’t know where to sit and therefore just takes any seat he or she likes.

Each student got to take a turn as the nice person at the back of the line and the “not-so-nice” person at the front of the line. When asked before the activity what the answer to the question was, almost all students said 1 out of 100. Then we acted out the problem, and the last person got his or her seat in 9 out of 16 trials!

The actual probability is 50%, and, somewhat surprisingly, it doesn’t matter how many people and seats are on the airplane, as long as the number of seats is equal to the number of people in line. We will spend more time later in the week discussing the basics of this “Airplane Math.” Our discussion today was mostly conceptual, but we will delve into the calculations that justify this counter-intuitive answer.

We also spent a fair amount of the afternoon investigating Sudoku puzzles and learning some tricks and strategies for completing them. Several students asked to bring some extra puzzles home, so I think it was a fun afternoon! The first problem we did together on the board, and the students really liked what it looked like without the projector on! A picture of the seemingly nonsensical board is below. I do look forward to challenging them with more interesting Sudoku puzzles later in the week.

It’s hard to believe that class is more than half over! This group has been wonderful to work with, and I am so excited to see what they come up with over the course of the last two days! 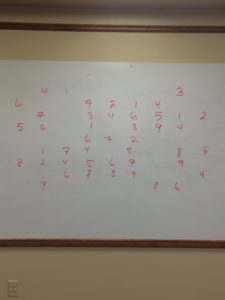 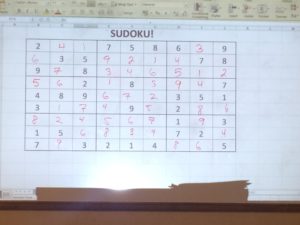