This past week, we focused our class on the immune system and how this system works to keep us healthy. After an ice breaker diagramming out the basically inputs, outputs, and components of the immune system, we played a recent app Bacteria Combat, which was created by Glasgow University microbiologist Carla Brown. This app was a fun way to explain the battle between good bacteria and bad bacteria during infections as well as showing the key characteristics which define the virulence of a pathogen: strength, speed, replication rate, and resistance. While battling their peers in the class, my students picked up an understanding of a few pathogens such as Staphylococcus aureus, E. coli, Listeria, and Salmonella.

After gaining some experience online battling bad bugs with immune responses, the class went outside to undergo immune battles themselves in an activity called “Immune Red Rover”. After reciting an immune component or pathogen rhyme, my students worked to break the defenses of their opponent. Each rhyme would teach the class a little about the pathogen or immune cell they represented. Due to a tie at the end, our winning team achieved victory by naming two different parasites: tapeworms and heartworms. 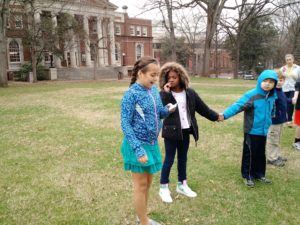 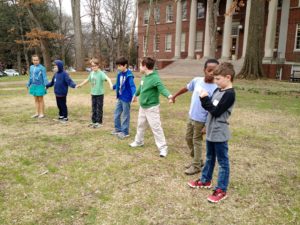