This week in Chromatography 101, I asked the students to consider how they would alter the chromatographic techniques we have learned thus far (specifically thin layer chromatography) if they were interested in collecting the isolated components of a mixture instead of just visualizing them. Answers included performing thin layer chromatography and then removing a desired given spot by scraping it from the plate or running the sample off of the top of the plate and trying to collect it as it came off. I then explained that the former is occasionally done if you only need a small amount of sample, while the latter is used (in a slightly different manner) to allow for the collection of isolated pure compounds. For this technique, called column chromatography, silica gel is placed in a vertical, cylindrical column (as opposed to on a glass plate). The sample to be separated is then placed on top of the silica layer and the mobile phases are added to the top of the column. Samples then elute, or are removed from the silica, depending on their relative affinities for the stationary phase (silica gel) and the mobile phase(s) and can be collected as they drip out the bottom of the column. 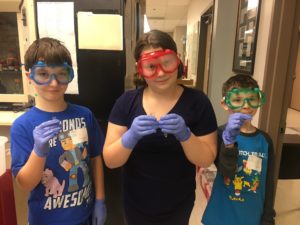 the lab experiment this week, the students were tasked with performing column chromatography to separate the various pigments found in collard greens (a vegetable that the students agreed was worthy of being used for science experiments as opposed to consumption). A version of this experiment, in fact, was the original one that the founder of chromatography, Mikhail Tsvet, an Italian-Russian botanist, originally performed with the goal of separating plant pigments in order to study the role each played in photosynthesis. After extracting the various plant pigments from the collard greens, the students separated β-carotene from chlorophyll; the β-carotene appeared visibly yellow as it migrated through and eluted from the column, while the chlorophyll appeared green. Ask your student to describe his/her experimental procedure, the collection of samples, and any challenges he/she faced duri ng the process. Column chromatography is commonly used, as it was in this experiment, for the isolation of natural products (compounds from plants, fungi, bacteria, etc.), which are very difficult for chemists to synthesize and thus are more cost-effectively procured by isolating them from living species that naturally produce them. Synthetic organic chemists, biochemists, and pharmaceutical companies also use this technique to prepare pure compounds (separating them from impurities and other side-products produced during chemical reactions). 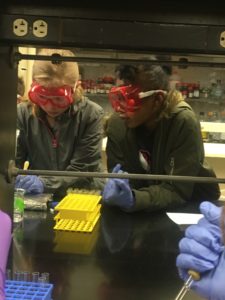 We concluded our time together discussing some of the disadvantages of this method, as it was performed in our lab this week. In particular, the students mentioned how it took a long time and that their hands got tired of holding tubes for collecting fractions. We brainstormed some ways to solve these problems (ask your student about his/her proposed solutions), and next week we will be introduced to a new chromatographic technique designed to address many of these very issues.

Have a wonderful week!