The 4th day of “Creative Writing: (Re)Imagining the Monstrous” was incredibly productive, leading students to a number of exciting conclusions about literary technique and their own writing processes. To review everything we’ve learned so far, each student chose one of the three questions to answer on a notecard: 1) Who do you think is the most monstrous character we’ve read about so far? Why?

2) How could meter affect an author’s syntax? Their diction?

3) How could you use rhythm or meter in your own short story?

We then anonymously exchanged notecards in class and read each student’s intriguing answer aloud. We talked about how many students believed the most monstrous character to be the speaker in Robert Browning’s “Porphyria’s Lover,” who is, ironically, the only human protagonist we have encountered so far. This discussion resulted in further insights into the complicated divisions between what we often assume to be “human” or “monstrous.” We also reviewed how an author might arrange his/her words to sustain a chosen meter or rhythm and how we might use iambic rhythm in our own stories to instill a more relaxed, conversational tone.

Students then broke up into groups to continue writing their short stories, concentrating on utilizing careful diction, rhythm, and syntax, and considering how they might finish their stories within the next three days of SAVY. After their writing time, students paired up to review what they had learned about iambs from our last class, going on to share their answers with their peers. This conversation brought us to an important question: How can sound impact characterization in a story? Students remarked that different rhythms can help the writer control the pace of a moment in his/her story, which could impact how we think of a character’s emotions and personality. 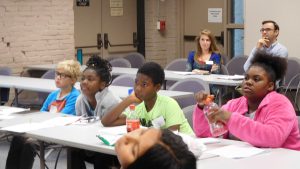 To consider this question further, we examined another metrical unit, the “trochee” (one stressed syllable, followed by an unstressed syllable). Using a spell sung by the Weird Sisters from Shakespeare’s The Tragedy of Macbeth, we found where each of the stressed and unstressed syllables were. We discussed how the trochaic meter feels faster and more foreboding than the iambic meter, and how much more calmer and innocent the witches would sound if they spoke in iambs. From there, we examined the haunting poem, “The Raven,” by Edgar Allan Poe, which heavily utilizes rhyme and trochaic meter. Students were drawn to the raven’s repetition of “Nevermore” and the strangeness of the raven’s appearance. They pointed out how the cyclical chanting of the raven’s speech could reflect the narrator’s obsessive thoughts about his dead beloved, his growing madness and fury, and his uncertainties and fears about the afterlife. Students also noticed how the tight trochaic structure creates a momentum that lifts and pushes us through the poem at a fast pace, making the character of the narrator seem more reckless and unpredictable.

To finish our examination of “Music and Monsters,” students made a list of invented words (“neologisms”) they felt were “soft” and a list of words they felt were “spiky.” They were challenged to find the sounds common amongst the words they created, discovering that words featuring long vowel sounds, l’s, s’s, m’s, and n’s often seem gentler to a listener, while words featuring short vowel sounds, v’s, k’s, d’s, and t’s often seem harsher. We talked about how we might use these findings to choose emotionally evocative character and place names in each of our stories.

I’m looking forward to our next class, when we will continue to write, practice workshopping each other’s stories, and talk about dichotomies, imagery, and exposition in Elizabeth Bishop and Robert Louis Stevenson.