Our kick-off Movement Moment this morning featured Willy Wonka singing “Pure Imagination,” a reminder that we must be able to imagine a different world before we can begin to bring it into reality – but also that we must be willing to act to create what we’ve found in our imagination. In collective action parlance, we need to not only be able to identify the World As It Is, but also the World As It Ought To Be. Once we know the shape of our hopes, we can begin to craft concrete goals to achieve. In their newly formed Collective Action Groups, the students did just that, spending much of the morning determining how they want to change the world and the achievable goals that will allow them to do so. After a brief interlude with selections from A Wrinkle in Time, we welcomed a guest speaker: Byron Harvey of Nashville Organized for Action and Hope, or NOAH. Mr. Harvey is also the Director of Youth for a Peaceful Community, and brings his years of experience in Metro Nashville Public Schools to bear in his vision of peace and justice for the Nashville community. From Mr. Harvey we learned about the power of people to hold elected officials accountable, the importance of restorative justice, and the basics of nonviolent civil disobedience. After lunch, we continued to work on our Collective Action projects while learning from real-world examples like the Women’s Suffrage movement. Another text – The Circle of Magic by Tamora Pierce – served as an illustration of how our experiences, values, and personalities – our biographies – matter when we join with others for collective work. We concluded our day by applying that insight about personal biography through the collective action tool of storytelling. Tomorrow morning students will embrace the bravery exemplified in the Sara Bareilles music video linked below (and our closing Movement Moment) and work on their Story of Self, a story that conveys the values that bring them to care about the work of their collective action project.

Chipotle gives us an example of an Is/Ought Statement, although (given its commercial roots) it should be taken with a grain of salt! https://www.youtube.com/watch?v=aMfSGt6rHos

Here’s a Change Agent Biography word cloud (a word cloud of who we are as a class!) that our class produced: 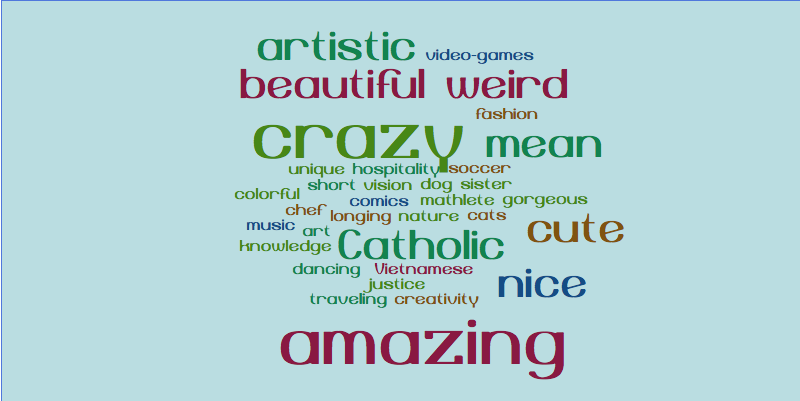